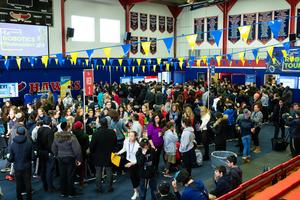 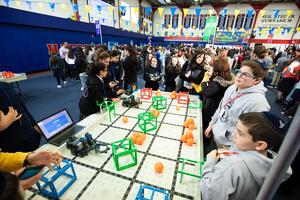 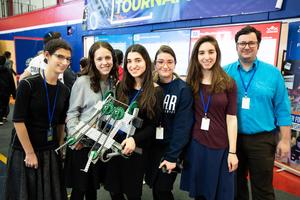 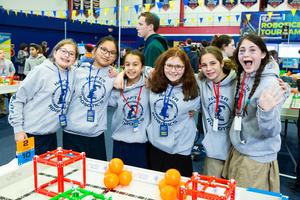 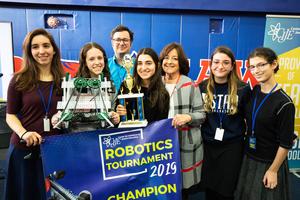 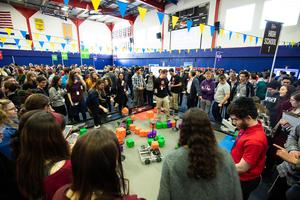 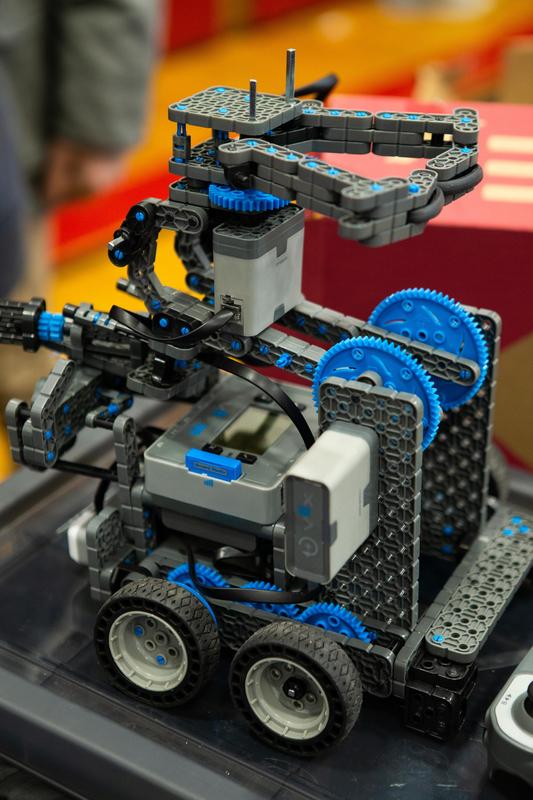 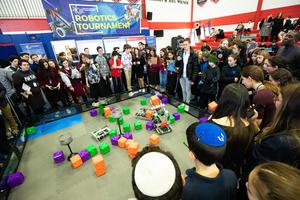 CIJE hosted the first robotics competition of the year at HAFTR on December 19th. Over 30 middle schools and high schools came together to show their creativity and technological achievements.

Educational experiences are most pronounced in the context of the real world. The same holds true for Robotics, ingenuity and complexity comes when competing against other robots within a defined  framework. In the past, Jewish day schools have been limited in their ability to take part in national Robotics leagues due to Shabbat observance and the limited time students had after completing a dual-curriculum (Judaic and general studies). In order to create a robotics league that catered to the unique demands of Jewish day schools, the Center for Initiatives in Jewish Education (CIJE) decided to network their participating schools and created a new Vex Robotics League. Established over ten years ago, CIJE has implemented a STEM curriculum which is utilized by 200 Jewish day schools across the country. This year the organization decided to push its boundaries by expanding its robotics league to middle schools. Last week, CIJE hosted its Robotics competition at HAFTR Middle School. Twenty schools participated, bringing fifty impressive student-created Vex robots to the event to compete. Mr. Jason Cury, president of CIJE, commented on the importance of the event. "This event is more than a competition. This is how we create the next great leaders in STEM,” stated Mr. Cury.


Students began building their robotic frames by following instructions, but ultimately re-engineered their design to optimize their robot for the challenge. The challenge paved the way for creative approaches to problem solving, as well as the opportunity to hone essential soft skills: collaboration, strategic thinking, troubleshooting, agility and the ability to pivot seamlessly. Through this initiative, students gain first-hand exposure to robotics, which is a conglomerate of three separate disciplines: electrical engineering, mechanical engineering and computer science.  Mrs. Judy Lebovits, vice president of CIJE pridefully commented, "We carefully construct our robotics to hit specific educational criteria and standards, but more so, this is about the students testing their self-confidence and their determination to succeed."


At the High School competition, Central (YUHSG) and JEC took the top honors. Central students constructed a claw with two aligned screws that had impeccable gripping power over the cubes- their win is clear testimony of their strategic prowess.  Rabbi Ami Neuman, principal of JEC was elated to watch his students shine. "It is so fulfilling to achieve this win today,'' commented Rabbi Neuman. "Our incredible STEM program has transformed the way we view education.” HAFTR swept the middle school competition by placing first, second, and third, led by Mrs. Gittel Grant, director of STEM and Science Innovation. Mr. Joshua Gold, principal of HAFTR Middle School, commented on the win, saying, "We are so grateful to CIJE for providing this opportunity for students to engage in a competition that promotes creativity, collaboration, and innovation." Mr. Gold continued, "Today was a testament to the high-level work students are doing in their Science classes, and how well positioned they are to be successful in the evolving job markets of the future."

The Center for Initiates in Jewish Education is crafting programming that expands students’ exposure to high levels of STEM in ways that are both real-world and competitive. Earlier this year, CIJE hosted Shark Tank for high school students to pitch their electronic capstone projects to a panel of Venture capitalists. In January,  CIJE is hosting a coding centric, Internet-of-Things, Hackathon at Yeshiva University. In April, students will expand their robotic skills and will gather in another championship to perfect self-driving, autonomous mode challenges. CIJE is committed to providing day school students experiences and cutting-edge curriculum that will give them the tools and empowerment to engineer a better tomorrow.