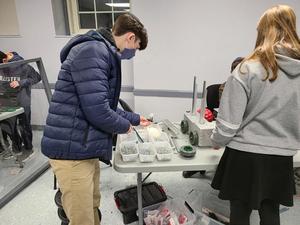 Rabbi Baruch Noy, Director of STEM and Educational Technology at HAFTR, was an instrumental part of creating the Center for Initiatives in Jewish Education (CIJE) Vex Robotics League, catering to the unique demands of Jewish day schools. Since the competition was created, it has expanded from four schools to over 20 across the tri-state area. HAFTR was the host of last year’s inter-school competition. While this year’s event could not be held on the same scale, with multiple schools competing in one location, the competition still took place, with CIJE staff visiting each school for an onsite event.

The HAFTR community was treated to an early glimpse of the robots our high school students had created during the Dinnerthon, where senior Tanchum Yonk explained the rules of the competition, and exhibited his team’s robot in action.

On Monday, January 11, HAFTR High School students contended. Students designed their robots from scratch, positioning motors and components so the robots could lift the Vex balls and put them in the goals. Students also programmed the robots using original code. The collaboration among team members was in overdrive as the competition approached, and their dedication impressed all of their faculty advisors.

Mrs. Bohensky and Rabbi Noy expertly guided the robotics teams. As we await the final results of the competition, what we already know is that the HAFTR students enjoyed themselves and displayed school spirit with pride.