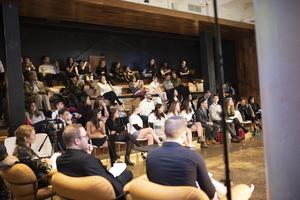 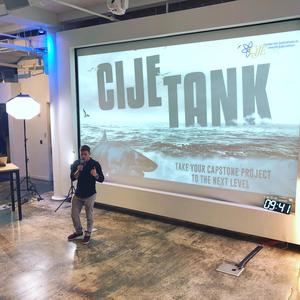 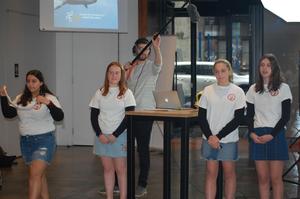 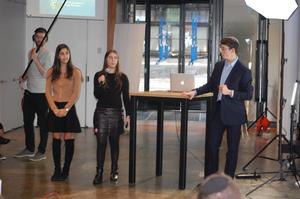 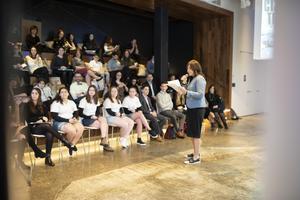 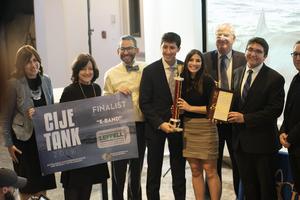 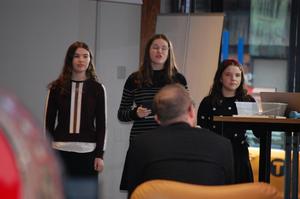 Young Entrepreneurs filled the Flatiron space in downtown Manhattan, the home to Tumblr headquarters, ready to take a stab at the business world. On Sunday morning, November 24th, the upscale space was filled with students, supportive teachers, and proud parents vying to see what the young CIJE engineers had concocted. It felt more like a movie set than a typical business office.

Students pitched their arduino-microprocessor based innovation, in front of a team of “Sharks.” Their projects were among the seven semi-finalists whittled down from seventy who had submitted their projects to CIJE Tank, a competition that promotes product development and entrepreneurship. The seventy projects originally appeared among the 400 team projects presented at the annual Center for Initiatives in Jewish Education (CIJE) Innovation day that features the culmination of the CIJE two-year high school engineering course.

The semi-finalists had their moment of stardom on stage as they pitched their business presentations to a panel of three investors (“sharks”), who then chose one group of budding entrepreneurs to receive a preliminary patent for their innovation, which was generously sponsored by Nathan Renov at Pearl Cohen.

The audience was inspired by the CIJE students’ ingenious product solutions, articulate presentations and sincere dedication to improving the lives of millions. For example:

HAFTR students focused on conserving energy with their Pezoelectric Powered Car. The team displayed an impressive tire lined with an array of piezoelectric tiles that generate energy as the car drives and applies pressure to the tiles.

The Frisch team took the challenge of drastically reducing the damage caused by electrical fires. The Electralalarmer alerts residents once the temperature of the electrical outlet reaches dangerous levels. The product uses both sound and light and is housed in a commercial-grade casing.

The Kushner students tackled the proliferation of vaping in schools by creating a concealed Juul detector they call J-Dawg (Juul Detector and Warning Gadget). Using a sensor that detects the main chemical found in electronic cigarettes and housed in what looks like a typical air freshener, the device alerts the front office when Juuling is detected.

Bruriah students aimed at alleviating the challenge and pain of pushing a wheelchair up an incline and created the WheelCheer. Increased force exerted on the handlebar triggers DC motors to assist in circulating the wheels. The WheelCheer is an alternative to the expensive standard electric wheelchair aiming at lessening the load on the one pushing the wheelchair from behind.

Ma’ayanot students created Flex-it, a solution to assist in physical therapy. The therapist turns on the product, adjusts the threshold and sets the goal. The client slides the device on his/her wrist and a positive and a motivating message display while the device counts and interacts with the wearer helping and encouraging the wearer to properly comply with the exercise.

Leffel (formerly Solomon Schecther of Westchester) came with two teams. One, ConCausion,  “the fearless way to play sports” prevents concussions in sports that usually do not necessitate a helmet.  The device is an aesthetic-pleasing headband made of carbon fiber to disperse the energy across the head and compressing foam that absorbs the energy previously dispersed. An attached microprocessor records the force and then sends an alert to the athlete’s phone app with advice on how to treat the injury.

The winning product created by Leffel students was E-Band. Their product addresses the challenge of fatalities (5 million annually) due to external bleeding.  Currently, the use of a tourniquet is the only way to prevent external bleeding with the possibility of completely cutting off blood circulation to the injured limb, often resulting in amputation. The E- Band, in contrast, is a smart bandage tourniquet hybrid that prevents major blood loss from an injury while also avoiding the cut off of blood circulation. E-Band is a sleeve that can be easily slipped on and uses liquid sensors to sense where the blood is and which air pocket to inflate in order to only apply pressure to the wounded area. Once the bleeding begins to slow down, the band begins to release some pressure for both the safety of the user and their comfort. If the band senses that the user’s heart rate is dangerously low, it will immediately call emergency services, send the user’s location using the GPS module, and help will be on the way. All of these features have been designed to keep people with life-threatening injuries alive while they wait for further assistance. The E-Band revolutionizes the way that EMT’s, military medics, and the average person deal with life threatening situations.

The educational crux of CIJE Tank is the back-and -forth interaction CIJE students have with high profile “sharks.” For the second year in a row, Dov Friedman, Managing Partner at Imminent Capital - a VC fund whose mission is to fund the world’s most innovative products- joined us. Over the last decade, Dov has taken dozens of startups from ideation to the shelves of the biggest retailers in the world. His ability to spot the next big product and recognize the public’s shifting tastes has given him a unique and bankable edge in the world of venture capital.

Esther Hersh is one of the founders of TeachCS where she develops software to support Computer Science educators and helps schools build their CS departments. She is a graduate of NYU’s Interactive Telecommunications Program and a curriculum consultant for the CS4aLL team at the NYC Department of Education. She also works in Venture Capital for pre-seed and seed stage companies with the Kochin Group.

Zoli Honig who acted both as a shark and a presenter. He linked our event to the real Shark Tank since he appeared on the show and secured a deal to brag about. Zoli’s technological aptitude began when he was a teenager. He turned his skills into a successful business idea while in college. Zoli noticed that the educational platform used by most colleges and universities was inefficient and difficult to use. He decided to build a better application, Chalkable,  that could be used by primary schools as well as post-secondary institutions. He went on to create Waivecar, a free car-sharing program to consumers through advertising subsidies. WaiveCar is a car sharing startup currently operating in the Los Angeles area. The electric fleet is completely free to drive for the first 2 hours.

CIJE Tank was an exhilarating event imbued with professionalism, clarity, and much passion. Students presented great backstories and included setbacks and failures in their original product design process pitches. Our “sharks” asked the student entrepreneurs challenging questions about market sales, competitor companies, feasibility of production, and suggested alternate use cases and expanded markets. Students, riveted by the experience, beamed with pride at having the opportunity to learn from experts in the business world. CIJE is committed to providing day school students experiences and cutting-edge curriculum that will give them the tools and empowerment to engineer a better tomorrow. Student team project videos can be viewed at: www.thecije.org/cijetank